What are the foods that protect the eyes?

A primary school tested the eyesight of students collectively, and found that more than 50% of the students in most classes were myopic, and there were also high myopia among the lower grade students. Students use their eyes a lot. In addition to reading books, they often watch TV or electronic products such as computers, mobile phones, and ipads, and it is inevitable that their eyesight will plummet. A lot of adults who overuse their eyes also suffer from vision loss. People who need eye protection must eat less foods with high sugar content, such as candy and high-sugar foods. To protect eyesight, in addition to paying attention to the correct use of the eyes, we should also pay attention to the diet, eat more of the following foods, and supplement the vitamins A, B, C and E and trace elements such as calcium, chromium, and zinc needed by the eyes. 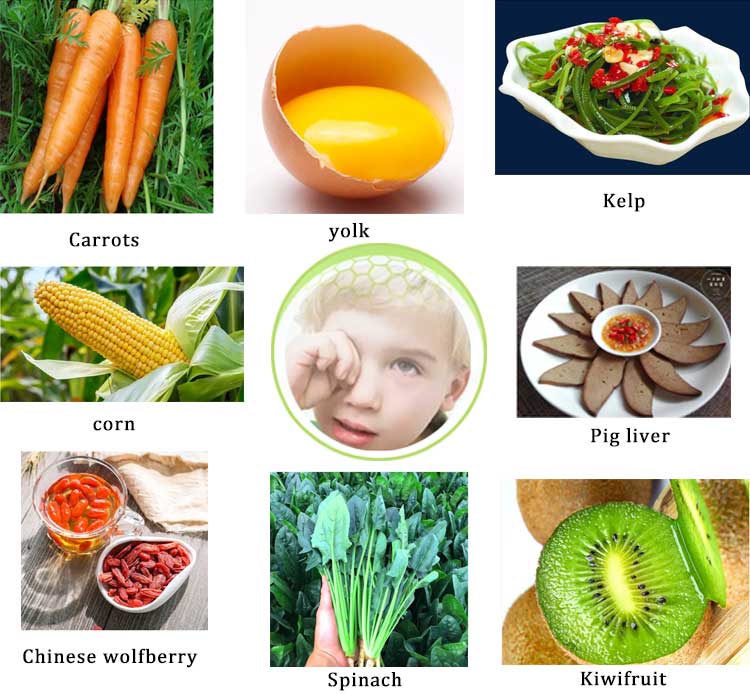 1.Carrots, carrots are the first choice. Carrots are rich in carotene, vitamin C and B, which have the effect of nourishing the liver, improving eyesight, clearing heat and detoxifying. The high content of carotene can be converted into vitamin A in the human body, which plays a good role in preventing and treating night blindness. The effect of cooked carrots is much better than that of raw carrots, because raw carotene is not conducive to absorption. When eating, try not to use juice and other methods to eat raw carrots, so as not to waste nutrients. It can be steamed, boiled or fried, and it is also good to make dumplings with meat. Chop carrots and cook them together with japonica rice to make carrot porridge, which is not only good for the eyes, but also has antihypertensive and diuretic effects, especially suitable for children with rickets, malnutrition and other diseases.
2.The yolk .The most nutritious part of the egg is the yolk, which is rich in vitamins A, B, D, E, K, etc. The main reason for the yellow yolk is riboflavin (vitamin B2). This is because hens eat a lot of green leaves or yellow corn, and the lutein and zeaxanthin contained in them are carotenoids, which are absorbed into the egg yolk. Lutein and zeaxanthin have strong antioxidant effects, which can protect the eyes from ultraviolet rays, slow down eye aging, and prevent eye diseases. People with sufficient amounts of these two nutrients will have particularly bright eyes. Although egg yolk is good, patients with hypertension, hyperproteinemia and hyperglycemia  should not eat more.
3.Kelp.Kelp contains nutrients other than iodine, as well as other trace elements, carotene, riboflavin, etc., which can protect the eyes. There is a layer of hoarfrost on the surface of dried kelp, which is the mannitol contained in kelp, and its role can't be ignored. Mannitol has a good effect in the treatment of glaucoma because mannitol has a diuretic effect and can reduce the pressure in the eye. When eating dried kelp, be careful to protect the mannitol on its surface. Before eating, rinse the kelp, steam it for 30 minutes, soak it overnight, and wash it for later use. If you want to cook the kelp softer, you can add a small amount of baking soda or alkali, and pay attention to the time. Thinner kelp is suitable for cold salad, and thick kelp can be used for soup.
4.Corn. Corn is a very popular staple food, and its nutritional value and health care effects are higher than other staple foods. Rich in protein, vitamins, trace elements, etc. Generally, it can be divided into yellow corn, white corn, black corn, miscellaneous corn, waxy corn and so on according to the color. Among them, yellow corn contains a lot of lutein and zeaxanthin, which is especially beneficial to human eyes. Corn can be directly used as a staple food, porridge, etc., and can also be added to dishes, whether it is boiled or steamed, it is very suitable.
5.Spinach. Although spinach should not be eaten with tofu, milk and cucumber, its nutritional value should not be underestimated. The calcium, potassium, magnesium and other minerals contained in spinach can’t be underestimated in the prevention of myopia, and the vitamin B and carotene contained in spinach can protect the eyes well. Vitamin B2 is sufficient, red blood silk will rarely appear in the eyes. There are many ways to eat spinach, such as frying, mixing, boiling, etc., and cooking spinach porridge is also a good method.
6.Kiwifruit.Kiwifruit contains a relatively large amount of vitamin C, which cannot be compared with ordinary fruits. People with enough vitamin C are less likely to get cataracts. Kiwi also contains carotene and other vitamins, which are very beneficial to the eyes. Kiwis are great for juicing or eating directly.
7.Chinese wolfberry.Chinese wolfberry is one of the four treasures of traditional Chinese medicine, which is recorded in "Compendium of Materia Medica" and "Shen Nong's Materia Medica". Chinese wolfberry is also known to have the effect of nourishing the liver, improving eyesight and soothing the mind. This is because the carotene contained in wolfberry is high, which can be converted into vitamin A in the human body. Among the many wolfberries, the ones from Ningxia have the highest medicinal value. When purchasing, you can see if there are small white spots on the tip of wolfberry. Most of the Ningxia wolfberry tips have white spots. 90% of them do not sink in water, but float on the water surface, whether it is making tea or soup. Chinese wolfberry can also be used in vegetables to make wolfberry shredded meat with lean pork and green bamboo shoots.
8. Pig liver.In addition to the function of nourishing blood, pig liver is full of iron, zinc, riboflavin and other ingredients, which has a strong effect of nourishing the liver and improving eyesight. In "Qianjin·Shizhi", it is recorded that pig liver can improve eyesight and prevent dry eyes and fatigue.
Eating foods that are good for the eyes is one of the ways to protect the eyes. In addition, participating in more physical exercises, enhancing physical fitness, and developing correct eye habits are all beneficial to protect your eyes.