Who invented the eyewear?

Who invented the eyewear?Let Bestsea eyewear factory, who has been engaged in the eyewear industry for many years, tell you a story.

eyewear first appeared in Florence, Italy in 1289. It is said that they were invented by an optician named Armato and Spina-an Italian living in Pisa.

American inventor Benjamin Franklin suffered from nearsightedness and farsightedness. In 1784, he invented both distance and near vision eyewear. In 1825, British astronomer George Avery invented eyewear that can correct astigmatism. 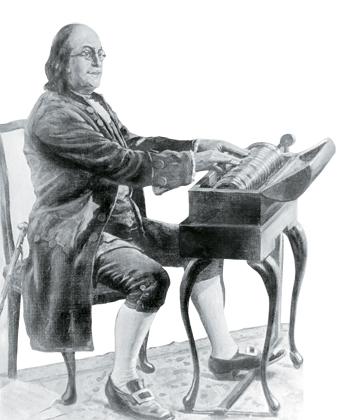 Benjamin Franklin wears the eyewear he invented, and in his hands is the glass piano he invented

Some people think that the Chinese invented eyewear 2000 years ago. eyewear appeared in my country in the mid-Ming Dynasty. Tian Yiheng, Wanli of the Ming Dynasty, had such a record in "Liuqing Rizha", which probably meant that every time he read an article, he felt blurred vision, so he made a transparent object and tied it with silk and tied it behind his head. This may also be a kind of primitive eyewear. There are not many images and physical materials of early eyewear in our country. There is an old man wearing eyewear in the Ming painting "Southern Capital Fanhui Scenery Picture Volume" (depicting the life scenes of the people in Nanjing during the Yongle period of the Ming Dynasty). In the Qing Dynasty, Zhao Yi said that eyewear  were introduced to China during the Xuande period of the Ming Dynasty. During the Jiaqing period of the Qing Dynasty, eyewear had been popularized. Zhang Ziqiu once stated in a poem that people with myopia wear eyewear, so eyewear for myopia still gained some popularity at that time.

Since humans invented the lens in the 13th century, crystal eyewear has been used to polish the lens. In addition to the use of crystal, China also uses artificial crystal. Later, glass lenses were used. In 1937, France invented a plastic spectacle lens called acrylic. Although it is not easy to break, it has poor clarity. In 1954, an engineer from the French company Essilor was inspired by the materials used to make aircraft cockpits and invented resin lenses.

Since then, this type of lens has become the supreme of the world's lens kingdom and is still in use today. Below is a pair of acetate sunglasses.

Below is a pair of Metal optical.

Below is a pair of Buffalo horn eyewear.

NEXT：Talking about the development history of sunglasses