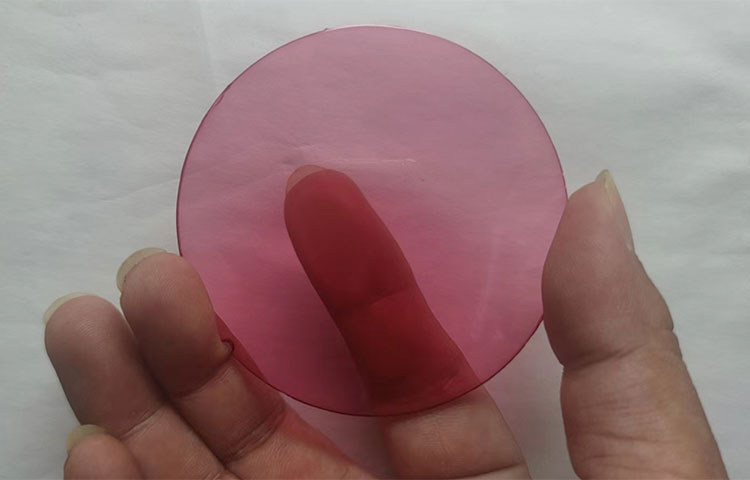 What is resin lens? Resin is a hydrocarbon secretion from many plants, especially conifers. It is valued because of its special chemical structure and can be used as latex paint and rubber. It is a mixture of a variety of polymer compounds, so there are different melting points. Resin can be divided into two types: natural resin and synthetic resin. There are many types of resin, which are widely used in light industries and heavy industries. You can often see in daily life. Such as plastic, paint, etc. Resin lens is a kind of lens chemically processed and polished with resin as raw material.
What are the advantages of resin lenses?
1. Light. The general resin lens is 0.83g/cm³-1.5g/cm³, and the glasses lens is 2.27g/cm³ ~ 5.95g/cm³.
2. Strong impact resistance. The resistance of resin lenses is generally 8-10kg/cm2,Its impact resistance is several times that of glass, so it is not easy to break, safe and durable.
3. Good light transmission. In the visible light area, the transmittance of the resin lens is similar to that of the glass. In the infrared light area, it is slightly higher than that of the glass. In the ultraviolet area, the transmittance decreases with the decrease of the wavelength starting at 0.4 um, and the light with the wavelength less than 0.3 um is almost absorbed.
4. Low cost. Injecting and molding lenses only need to make a precise mold, which can be produced in large quantities, saving processing costs and time.
5. Can meet special needs. It is not difficult to make non-spherical lenses with resin, while glass lenses are difficult to do.
Why did the resin lens gradually replace the glass lens?
1. The surface luster and smoothness of the resin lens are good. As long as the mold is precise, it can even reach the level of glass lenses.
2. The dispersion of resin lens is very similar to that of ordinary glass lens.
3. The perspective rate of resin lenses is 92%, which is very close to the level of glass lenses.
4. The surface reflection of the resin lens is lower than that of ordinary glass lenses, and it is not dazzling. This is due to its high light transmission rate and low refractive index.
5. The optical properties of resin lenses are extremely stable. No change in high temperature or low temperature.
How is resin lens produced?
The resin lens must be processed by strict 12 processes. Material preparation → mold assembly and pouring →First solidification and forming → opening mold → lens cutting edge → lens cleaning → secondary solidification → base lens test → lens hardness → tested after hardened → lens coating → coating layer test. Finally, the packaging.  The packaged lens is the resin lens we see.
What is the refractive index?
The ratio of the sine of the incident angle to the sine of the refraction angle when light is refracted from a vacuum into a medium. Its value is generally between 1.49-1.74. Under the same degree, the higher the refractive index, the thinner the lens. So it is very suitable for making myopia lenses. If anyone who has used glass myopia lenses knows that the previous glasses are very heavy, and the current myopia eyewear can be made very light. The biggest difference is that most of the resin lenses are used now. 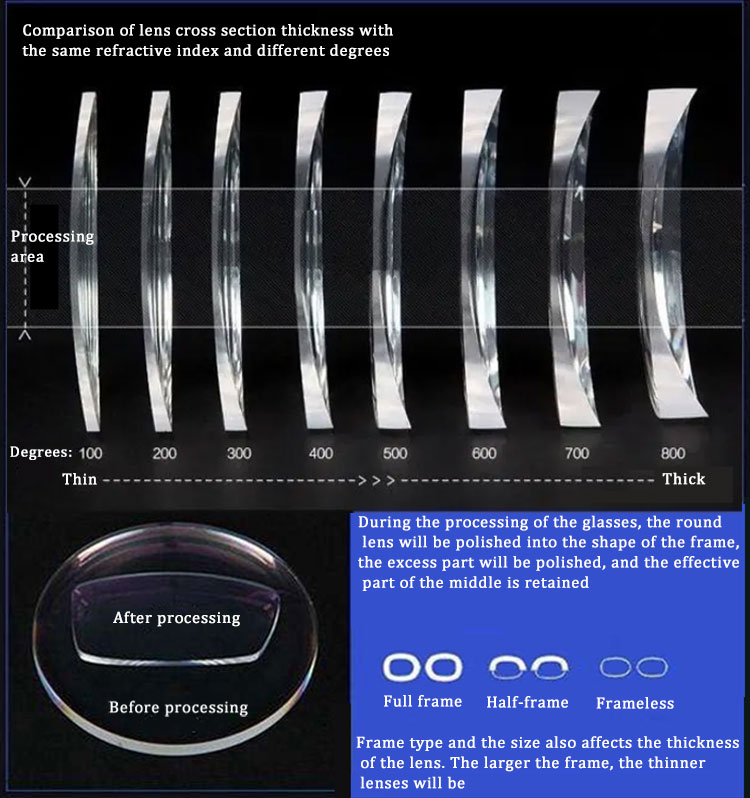 Why should resin lenses be coated?
Many consumers like to buy coated resin lenses. The function of various coating layers are different.Some lenses are even coated with several kinds of films, such as antireflection film, hard film (anti-wear film) and anti radiation film.
1.Anti-reflective film. Use the principle of light interference to reduce redundant reflectied light on the lens surface.  Improve light transmission and reduce glare. Make people see more clearly. At the same time,it can reduce reflection. Makes the lens more beautiful in appearance.
2.The hard film can effectively protect the surface of the lens from being worn. It can also resist the damage of hard objects. Extend the life of the lens. It is generally added to the front surface of the lens. Enhance the resistance of resin lenses. At the same time, the permeability of light has also been strengthened.
3.Anti -radiation film can block the harmful ultraviolet rays in the sun and the harmful light emitted by electronic products.
4.Anti-pollution film: due to the large gap between molecules of the antireflection film. The lens surface is easy to hide dirt. The molecular particles of anti-polluting film are small and small space between molecules. Make the lens surface more smooth,Increase the functions of waterproof, anti-fog,dustproof,pollution prevention.
What is aspheric design?
Traditional spherical lenses. The lens is not only thicker. Moreover, the distortion and deformation of things seen through the periphery of the lens are called aberration. At the same time, others can observe the wearer through spherical lenses, and they can also obviously find the deformation of their facial contour. The non-spherical lens not only reduces the central thickness and edge thickness of the lens, makes the lens thinner, the lens vision is wider, there is no arc on the edge, the image difference is minimized, the image is natural, and it will not feel fatigue when wearing it for a long time. The lens of the same degree, the non-spherical lens is more than 30% thinner than the spherical lens. 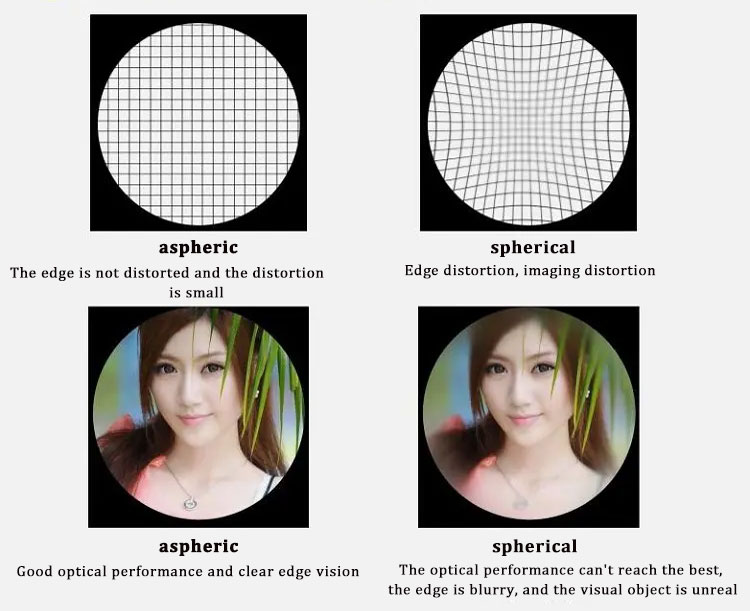 The color of the coating is different, is the function different?
After the lens is coated. The amount of light antireflection of the lens to different wavelengths is also different. Therefore, people will see the color of the coating layer. Generally speaking, the ultraviolet protection effect of purple film is better;the blue film has good anti-radiation and anti-fatigue effect; the anti-reflector effect of the green film is better; the night vision effect of yellow film is better. At present, there are more green films and blue films on the market. When choosing glasses, choose the one that suits you according to your needs and preferences.
How to maintain resin lenses?
1. When the glasses are not worn, put them in the glasses box. Do not contact the front of the lens with hard objects.
2. Rinse the lens with tap water before wiping. If there is oil, drop a little dishwashing detergent, rinse it with tap water, and then absorb the water with a soft paper towel.
3. Wipe the lens with special fiber cloth. If the fiber cloth is dirty, it can be cleaned before using it.
4. The coated resin lens or PC lens shall be protected against high temperature. Don't wear glasses to take a hot bath, Don't wear glasses to wash sauna; Don't put your glasses in a car that is sunny in summer; Do not blow hot air directly onto the lens.
5. Although the surface of the resin lens is specially hardened, it is still slightly inferior to the glass lens.Therefore, avoid rubbing with hard objects and try not to wear it when swimming at the seaside.
What glasses are resin lenses mainly used for?
The use of resin lenses is very wide. Whether it is sunglasses or myopia glasses , resin lenses are widely used. The following mainly introduces several common collocations.
1. Acetate glasses are the type of glasses that use the most resin lenses. For example, the lenses of acetate sunglasses are CR-39 resin sun lens.
2. Metal eyewear and titanium glasses generally select lenses according to their styles. CR-39 resin lenses can be used for those with regular shapes. Nylon lenses can be used for those with irregular shapes and half frame or rimless glasses.
3. Only CR-39 resin lens can be used for horn glasses. CR-39 lens not only has good light transmittance and light weight, but its edges will not react with horn.

PRE：The factors that determine the quality of optical glasses